The Minigunner, commonly referred to as “Mini”, is a tower that can be bought in the store for $2,500. When placed, it has a red torso, gray legs, and yellow head and arms. It wields a Vulcan M14-A2 Gatling Gun as its weapon.

It is arguably one of the best towers in the game due to its cost efficiency and high damage. It costs $16,775 to completely upgrade the Minigunner (after the starting cost of $2,000). The Minigunner has a Damage Per Second of ~61.5 at the max level. 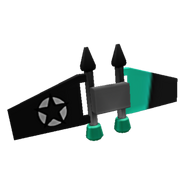 Old level 5 Minigunner upgrade picture
Add a photo to this gallery
Retrieved from "https://roblox-tower-defense-simulator.fandom.com/wiki/Minigunner?oldid=32177"
Community content is available under CC-BY-SA unless otherwise noted.